You can listen to the spoken word version of this article on YouTube here.

The first time I remember being taught how to catch and play with live rattlesnakes I was 6 or 7 years old. At the time, we were living in the mountains in central California up outside of Potter Valley. Rattlesnakes were prevalent in the area and in fact a den of them was real close to our camp. For that reason we had logs lashed into the trees for our sleeping areas as we frequently had them show up in and around our camp. At this time it was my mother, stepfather, brother, sister, and myself. We also added the second of my three sisters that same summer. The story of my sister’s birth is entertaining in and of itself. We didn’t have transportation at that time so when my mom went into labor she had to hike out to the dirt road and ended up flagging down a dump truck. The cab was full but they did allow her to climb into the back of the truck and they drove down the mountain with her bouncing around the back of the truck. They drove her right up to the emergency room of the hospital where she climbed out the bed of the truck, walked inside, and gave birth. That must have been quite the sight having a woman in labor climbing out the back of a dump truck at a hospital.

There are many memories of my childhood that I don’t remember actively. When something triggers them it can be quite a flood between the memories and the emotions. However, this is a period in my life with many clear and fond memories. My parents had some hippy friends with a house up in the mountain and we settled down the road. Well, down the road, across a field, and on the other side of a stream. And the term house is a little overstated as well, it was more of a homestead that lacked power, running water, indoor plumbing, and the normal stuff we associate with that word. Despite all of that, it was a pretty nice setup.

The Pacific Northwest wilderness was home for me during childhood.

At this age a kid couldn’t have a more exciting excursion. I mean, we were basically living in tree forts. My brother and I spent our days chasing alligators lizards. Afternoons were best for that when they came out to bask on the rocks. We would attempt to catch garter snake in the field but you had to move fast to do that.

Once a week we head over to the homestead house to bath. There was a giant steel tub in the yard on a platform. It was filled from a nearby spring and a bunch of wood was piled underneath an on fire. It would take hours to heat the tub, as it was quite large. Again, great and fun times as a kid sitting in a giant wood fired hot tub in the mountains. While the fire was burning we were tasked with digging up soap root to use for bathing. Honestly I don’t think the soap root did much good from my memory but it must have been one of those hippy things.

During the evenings we created a fun game of catching the dragonflies that flew around the stream by our camp. Once my brother, myself, and our step dad all had dragonflies we would tie playing cards to each one. Then we would release them and see who would win by having the dragonfly fly the farthest. I guess this could be considered animal abuse of some sort in retrospect. I don’t however ever remember hurting the dragonflies so I’ll just have to leave you to be the judge of that. As a young kid it was definitely fun and a good way to kill time when there wasn’t much else to do besides explore.

Our step-dad ended up finding a drinking buddy up in the mountains as well. A mile or so deeper into the mountains another person had been living for quite some time it appears. Dad would go up every few days and the two of them would drink beers and tell stories. At first I would tag along and listen to the stories they told each other over the campfire. After a few visits however mom told us that we would all be staying at camp except for dad on those trips.

Oh yeah… the rattlesnakes. There were quite a lot of them. Dad kept catching and killing them on nearly a daily basis. He had a big board with the skins tacked onto it as he planned on making stuff out of them to sell. We also ate rattlesnake meat often as well. He would tell us how it was a delicacy at some restaurants and we were lucky to have it. I never was to impressed with the taste of it myself.   It was meat however, which I did enjoy especially over the normal course of rice and beans. 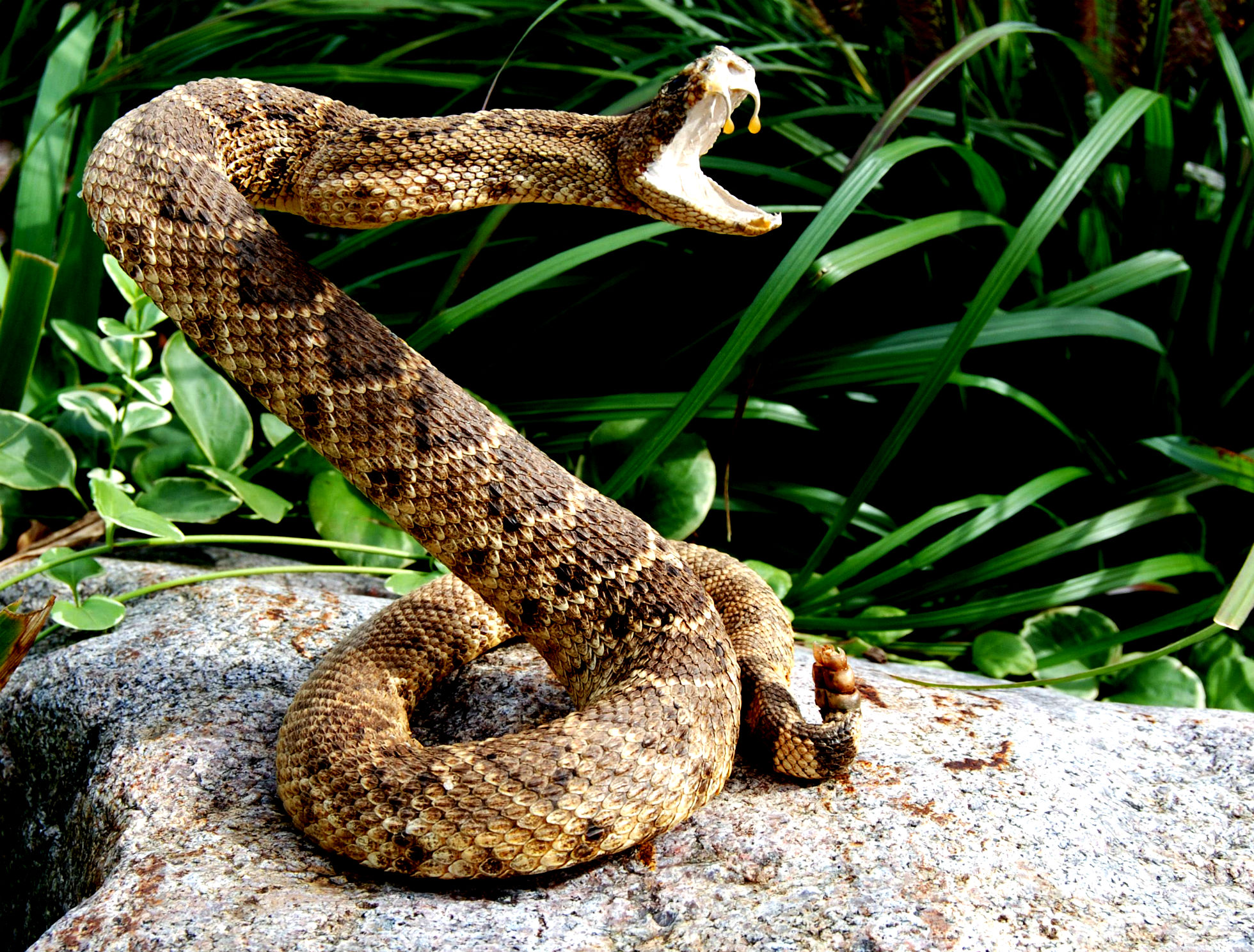 There was one day that my mom was sitting in camp breastfeeding my little sis when dad got a strange look and tone to him. He said to mom “do not make any movement and remain as calm as you can be”. He then slowly grabbed his long stick with a small “Y” in the end and maneuvered himself close to her. In the bush directly behind her was rattlesnake sitting in the coiled up position facing my mom’s back ready to strike. The Y stick is what he used to pin the head of the snake to the ground. Once the head of the snake is pinned you can pick it up if you know how or simply cut it off right away which is what was done in this case.

After that instance he began teaching me all about how to work with rattlesnakes. The distance they could strike while in the coiled position was much farther than what it looked like. He taught me where they hid, how they acted and responded. And most importantly I learned how to avoid, or kill them. I practiced making rattlesnake catching sticks with a Y at the end to pin their neck to the ground. I learned about not ever eating rattlesnakes that had been out of site. Once cornered the snake may bite and poison their own flesh with their venom. And their venom is no joke, here’s a very gory image of what a rattlesnake bite looks like after 36 hours:

And yes, at 6 years old I was taught to catch and play with live rattlesnakes. Once captured I would hold the snake right behind the head as it would wrap its body around my forearm. Feeling that cold body wrap and slither on my skin was a weird feeling. But I knew I couldn’t get distracted, as the slightest mistake would lead to death from this strange creature. Then I would have to hold the head to the ground and make sure I was behind the venom sacks before cutting the body off. Cutting in the wrong spot would contaminate the meat with venom as well. The knife I used in my childhood. It is full of stories… The rattlesnake skin was from one of the kills, and the bear and antler both have their own stories that will be saved for the future.

I loved all the detail, the steps, and the precautions that had to be taken. The thrill, excitement, and the tingly feeling that ran through my body along with the mixture of fear was something I’ll admit to liking as well. The feeling from holding something in my hands that could quickly kill me, but also the confidence I had in my safety if I did everything I was supposed to was rewarding.

In retrospect it’s instances like this that have likely played a big role in who I am. I have often wondered how the nerd with dirty clothes and no friends who literally “lived in a trailer down by the river” developed an astounding level of self-confidence. The belief that I could accomplish anything I set my mind to if I just put a plan in place and display the courage and work ethic to follow it through. At the same time I have been plagued my entire life with pushing my limits, risky behavior, and never settling. I chase danger and if I’m not living in some sort of chaos I WILL find it, or I will move on.

It’s not something I generally talk about, as the stories are not those you share publicly, but those close to me at any point in my life can attest to it. With these traits and behaviors I am simply lucky to be alive today. As I’ve gotten older and grown a family I have more to live for, so behaviors do change or at least temper. At the same time it is those same traits that brought me from absolutely nothing to performing at a world-class level as a corporate executive, lifting, off-roading (I’ve been in more publications for my rigs than my lifting), and now as a successful entrepreneur. One of my rigs photographed by Warn Industries for a magazine cover.

That deadly snake on my wrist taught me that if I knew the steps to be taken, was confident and controlled, that despite fear and risk I was in control of my destiny.

Apparently there was one more deadly snake in the grass to be dealt with that I wasn’t aware of. One day we had a ride arranged to spend the day in town. My mom did some shopping and we hung around the parking lot by the store for some time just killing time. My brother and I had fun picking cherries from a tree and eating those for hours. That evening when we returned to camp I was told that the police had come and taken away my dad’s drinking buddy. After my prodding I found out that he was a ‘bad person’ and had apparently been hiding out in the woods for years avoiding jail for murder. He had tied a man to a tree and beaten him to death with a tire iron over something like $20.

I never did ask how the police had found him, why we had just happened to been in town all day that day, and how my parents seemed to know the details of why they had come for him. I just knew without asking that this info must have slipped from him in one of those drunken conversations around the fire. And just like the other snakes in the fields there was nothing to fear. The snake was kept close until it could be controlled and the risk eliminated.

It’s not uncommon for me to hear someone say about me “you’re the most driven person I have ever met”. I don’t know if that’s really the case however. I’m turning 40 in a month I still wonder if I’m still just that 6 year old kid squeezing the sides of a rattlesnakes face to open its mouth so I can peer down its throat and see the size of the venomous fangs and watch its tongue flicker at out at me. Feeling the cold scales and underbelly move strangely over my arm. All those tactile feelings mixed together with the emotions of both fear and control. Is it ‘driven’ or do I just enjoy playing with snakes and have yet to be bit.